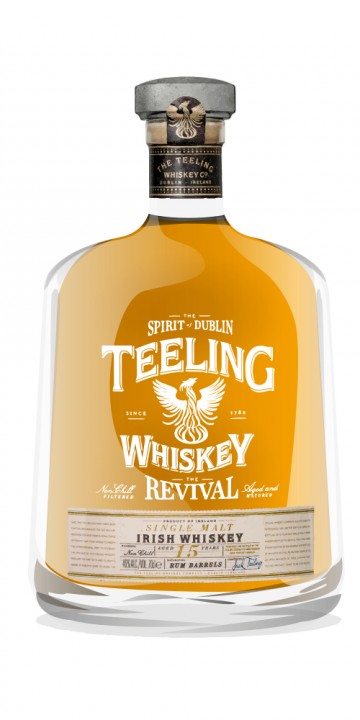 The Teeling distillery, Dublin’s latest asset, is celebrating its first birthday. Last year they released a special bottling of 15yo rum matured whisky to honour the occasion of their rebirth, called Revival. A fun little whisky, that though a tad expensive, really showed the remarkable evolution Irish Whiskey has gone through these last few years. Can you imagine the joy of finding a sample of this year’s Teeling Evolution II, with a complementary glass on my doorstep? Even more exiting is that they swapped the rum treatment of the previous Revival with a Calvados finish after Bourbon maturation. A calvados finish? Yes, seems like a great choice to add some fruitiness to a whisky that has only just entered its adolescent years. Still they are hard to find and it is definitely a first to me. This is exhilarating…

Description: distilled in 2002, presumably at the Cooley distillery, matured for 12years in bourbon barrels before being finished in Calvados casks, bottled in 2016 for Teeling.

Nose: light and floral, a strong aroma of apple pie (no surprises there), cinnamon and powdered sugar with a soft touch of vanilla. Not quite like a warm apfelstrudel, more like an apple fritter.

Mouth: definitely light bodied. The palate starts off with a slight alcoholic nibble but then the pear and apple aromas come rolling in and it turns quite zesty all of a sudden, with a good portion of dried orange peel sprinkled on top.

Finish: ever so slightly drying with a tad of bitter orange oil. Cinnamon, cloves and cayenne notes give it a spicy send-off

Verdict: Who would have thought that the Irish were such funky sweet tooths? A simple light dram that packs quite a lot of punch in the both the indigenous and exotic fruit department. It may not be the most complex, but it is young and quite a lot of fun. Maybe the pricing is a bit off again, but they need to pay off their brand new distillery, thus quite reasonable.

As for Irish whiskey and sweet teeth...from what I've seen that is pretty common. Heavy caramel and toffee are common features with Irish whiskey, especially with the blends. Too common.

Another nice review, and good to see you're drinking some stuff that you ENJOY!

Though, personally, I'd be a little wary of samples of clear brown/yellow liquid left on my doorstep... I guess you got lucky.