Average score from 7 reviews and 23 ratings 78 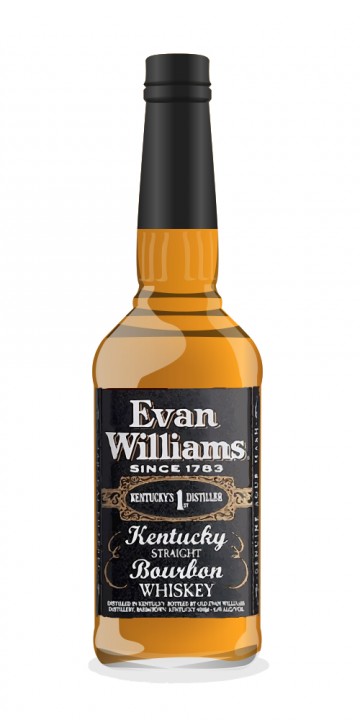 So this is Heaven Hill's flag bearer and the second best selling straight bourbon brand in the USA and the world. No longer age stated, but said to be somewhere around four years+.

All Heaven Hill's bourbon comes from the same high corn masbill. 78% Corn, 10% rye and 12% barley. This is interesting because I love the white label Heaven Hill, which must be essentially the same juice, but you can pick up variation in the aromas and flavours and they are different proofs.

On the nose I find this quite grain forward, with the corn very prominent and touches of barley chaff. Lots of sweetcorn. There's a clear mint, herbal and spice thing going on which gives way to the caramels and brown sugars, with butterscotch and cinnamon. I swear I get a little bit of dill pickle which I associate with rye, but there's so little in the mashbill it maybe just the mintiness from the corn that I sometimes get.

Taste is a little wood astringent, caramel, sweetcorn, vanilla, buttery, with some nice cinnamon spices. Honey. Quite buttery. I know it sounds obvious saying sweetcorn, but it's not always so prominent in bourbons. But in this I can really pick it out.

Finish is buttered popcorn and some astringent oak wood.

Very solid, nothing amazing. Goes well with a boilermaker.

If I'm going for Heaven Hill product I will choose the White Label HH, Bottled in Bond 6 year old or Elijah Craig, but this is still enjoyable. Next I need to try the white label version of EW.

I like EW products a lot. This was a very respectable bourbon and very moreish. As for the EWWL BiB I don't think you'd be disappointed. Awesome stuff for the price.

Enjoying a nightcap of EW BIB. Dash of water, let it sit for a bit, and it is very pleasing, especially for a $11 bottle.

My wife likes to cook pork with bourbon (lovely lady). So she likes keeping bourbon around for this occasion (which I totally support). Before we were married her go-to bourbon was Maker’s Mark. Saints-alive woman! I can’t support pouring 2 cups (16oz, nearly 475 mL, or over half a bottle!) of Maker’s Mark into her brine! (I’m just glad she never grabbed a bottle of Stagg!!). After she did this once with a bottle of Maker’s in my presence I dutifully began my quest for a cheap bourbon for her to cook with. The one requirement I have is that it has to be drinkable on its own.

Enter Evan Williams: I picked up a bottle of the Black label and tasted it against Jack Daniels, Evan Williams Green label, Wild Turkey 101, and Maker’s Mark

Nose: More subdued then either the Jack Daniels or the Green label Evan Williams. This isn’t as sweet or as sour as either of the other two. I am still getting Jolly Ranchers (green ones). I think I am getting some brown sugar but not that much: brown sugar, maple, and coal. Maybe a hint of something sharp? Corn, rye and butter. Now skittles, and other hard candies followed by citrus: oranges and lemons. Now, super sweet sugar cane candies. I think I like the sour Green nose more.

Taste: Much sweeter then the Green. More apple pie with a bit of spice to it (peppercorn, cayenne, and sweet corn). But this is still thin and watery at 43%

Balance, Complexity: Slightly more complex and well balanced then the Green. The nose had a very distinct impression of a “green Jolly Rancher.” That kind of thing usually impresses me. Still, I feel like there is a lot of room for improvement.

Aesthetic experience: I like the black label and the 43% better then the Green label, but I really feel like this is a rip off of Jack Daniel’s. So I would rather get the “original” that this is trying to emulate . . . some what poorly.

Conclusion: A miss for a cooking bourbon. It wasn’t miles apart from the Evan Williams Green label. Sure, it was sweeter . . . but that was about it. I find the nose of the Green far more interesting, but I enjoyed the taste and finish of the Black far more. I most likely won’t buy either again. For me this is an average-run-of-the-mill bourbon worthy of a C grade. Or in the case a 76.

Even though I didn't add this to my fave's list for whiskey's, I really do like this whiskey. I call this my "camping" whiskey. it's not too potent, has that right amount of kick. while sitting around fire.. Pretty smooth for the price.

I think of Evan Williams Black Label as being like "the wine cooler of bourbons"...light, sweet, undemanding. I am sure that the reason that it remains a top 5 US whiskey seller within the US is precisely for that reason: a lot of people want light, sweet, and undemanding.

First off I must admit I bought this on a lark. Took it home and I poured myself a shot and down the hatch it went. I normally don't do reviews and I don't consider myself an expert on bourbon. Now I read much from brazen drunks about the complex tastes of exotic bourbons and I really could care less about that snooty stuff. I wanted something "drinkable". I found it in Evan Williams Black Label! I do get a strong caramel flavor. A sweet finish. This is something that I could see as an everyday drink in the evening. A "working mans bourbon". The finish is short and for me that's OK. I only had one shot, and spent the rest of the evening wanting more. That's about as good as it gets. Very little burn. I think this is best right out of the bottle. Don't ruin it with a mixer. The Evan Williams boys got this one right. -

When I pour a bourbon, I enter the process with predicted results. There is a certain character that speak through a bourbon, usually a smoky char. I have had Evan Williams before, but here goes a review from scratch Nose: Your usual char, but more tame, diluted in watermelon juice. A bit sweet, a frosted berry/spearmint bubblegum. Some pulled sugar binds the beautiful aroma together. A controlled but intense dessert. Palate: Mild for a bourbon. Begins with fruit, melon with a splash of citrus, The fruit has depth, maybe some dark berries and even plums. the frosted coating shatters into the palate leaving a mouth coating sugariness. Finish: The sugariness sits until bitters make an unfashionable appearance. Rest assured, sugar rejects the bitters. Body: A swish of freshness, but not much more.

Don't pass this one up, but also be selective.

I had tasted this recently at a little house party recently with which I had recorded tasting notes.

Nose: With time in the glass the scent was fleeting and hard to grasp made a little water would have helped unfortunately that wasn't a thought in my head at the time. Anyways I had detected brown sugar, caramel, fall baking spices, pepper, and mint intermingling inside.

Body: With a swirl of the glass I noticed long thin yet slow moving legs which would indicate a medium/full body. The mouthfeel confirms this.

Taste: Sweet with toffee and caramel, vanilla likes to ride along. Spice and oak take the backseat before the finish.

Finish: Drying and spicy with oak, leather, and spice most notably cinnamon and black pepper. Maybe a little white pepper too.

Overall: Descent I can understand how this receives reasonable marks its not a simple bourbon but it can't receive 5 stars either. This could be a good starter whiskey for new whisk(e)y hobbyists. Cheap and reasonably flavored.

I'm a little pissed at how much I overpaid for this bottle at a private liquor store in Vancouver. That aside, it's not too bad. On ice, the nose is sweet, lightly spiced, with cinnamon and oak, brown sugar and furniture polish, even a bit of cedar. On the palate there is a lightly perfumed sweetness, a yeasty sweet taste like sugar cookies. The melting ice has taken the bite out of it for sure. The finish is long and a bit sour.

Overall I'm enjoying this whiskey more than I would have thought. It is easy to drink with an ice cube. For a bottom-shelf bourbon it does the trick.

Taste: This is a rather simple bourbon, sweet, fairly woody, light in body. It is not unpleasant, but rather lacking in complexity. I would never want to dilute this further than it already is

Balance: this is popular with the general public because it is easy, like a wine cooler. It works fine if you are looking for simple, sweet, and easy. The more aged single barrel versions are quite excellent

Would you recommend the 1783 #10, or the 1999 single barrel as the stronger representation of Evan Williams?