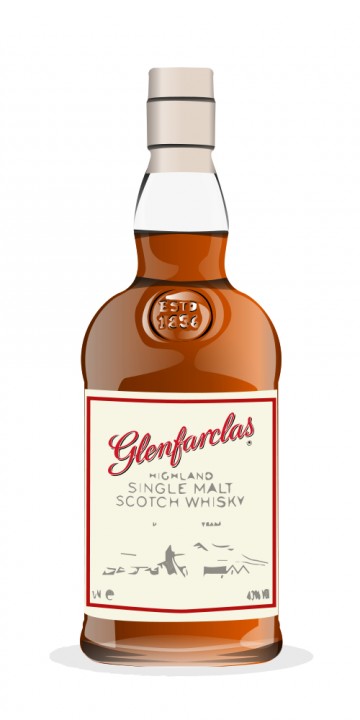 In my review of the standard 105, I mentioned that I was reviewing this 20yo H2H against it. Again, the first notes are for full strength (in appropriately small sips!).

First vapor: (Hot-) Cinnamon and a drop of cherry.

Nose: Caramel or big butterscotch; some vanilla/milk chocolate, but cinnamon-raisin is more prominent. The fruit is rather more (dried sour-) cherry (compared to the normal 105's pear). More interesting (less mellow) than the normal 105; but a touch hotter and sourer (I would have expected the reverse).

Finish: Toasted marshmallow and light cinnamon in the back, as the ginger heat dies down. Still with a zesty prickle.

Nose: There are still raisins/toffee/milk-chocolate, but something "big and chunky" opened up here, now...: Thick toasting marshmallows and chocolate. Like a dense Toblerone with raisins and floral cashews. I also notice an interesting hot black pepper added to this.

Palate: Essentially the same: caramel with sour cherry, but nuttier now. The ginger has happily subsided. Be careful with water, though: the milk chocolate and marvelous honey can also subside.

Finish: Quite similar but without the ginger burn: Light marshmallow and cinnamon, now with Brazil nut and nutmeg.

You can see my review for the standard 105 for other comments. Here I will just compare the two. Here are their similarities: (Nose) Caramel/vanilla/milk-chocolate (Palate) Toffee/sour cherry/ginger (Finish) Sweet/oak-spice/ginger

And basically what you get in moving to the 20yo is: (Nose) more sour-cherry/black-pepper (Palate) more nut (and without water, more oily ginger/honey) (Finish) more marshmallow.

I was quite happy with the standard 105 and can't say I appreciate any big improvements in the 20yo. My preference between the two is nearly a toss-up. In any case, the price difference (3x-4x !!!) is incomprehensible.

@Frost, Thanks for the comment, I hope it helps-- that's why I write! I should note that the 20yo was based on a sample (though I'm as thorough as possible with samples, including giving some time for oxidation). And it's worth mentioning that it really depends how you drink it: you would probably notice much more of a difference if you added a substantial amount of water. But probably you are not adding much water anyway, if you are purchasing these high ABVs....

My review of the standard '105': connosr.com/reviews/glenfarclas/…

This is a special bottling of the already awesome Glenfarclas 105, matured in sherry casks for 20 years. Served up at an eye-watering 60% ABV this single malt is not to be messed with!

The nose is strong and floral with an intense rose garland aroma. Strong sugars, flowing jaggery and a sprinkle of black pepper spices make up the dominant nose. Spend a little more time and you can discern pleasantly ripe bananas too!

The delivery is nothing short of spectacular! Imagine a dark chocolate hand grenade with a side of black pepper C4 exploding in your mouth without mercy. The 60% ABV comes into it's own here carrying with it dark plums, juicy raisins and a touch of something minty all swirled in gorgeous dark rum. A delivery hard to forget.

The nutty long finish is intensely spicy with an oaky dryness rounding off a smashing high strength sherry rendezvous.

Very Nice review, I've always liked my bottles of glenfarclas and this one sounds really nice. Hope to find a bottle sometime, Pitty it's a limited release.

Last night I decided I needed to have a couple of drams, especially as I was sadly missing a whisky tasting that a friend, WhiskyBaz, was doing in Perth as I had to help my wife out at the family business.

I'd decided to start with Wasmund's Single Malt and from there I realized I'd been eying the Glenfarclas 105 20 year old for a while now.

Now I was more then a little nervous as my brother in law and I had tried the Glenfarclas 105 about a month ago on a whisky tasting.

It smelled of just sherry, nothing else.

It tasted of just sherry, nothing else.

We were not too pleased, to say the least.

Personally I suspect that we had a bad bottle, but I could be wrong. That whisky does require further tasting.

Anyway I cracked the sample open and poured it into the glencairn about 40 minutes after finishing the Wasmund's Single Malt.

Pouring a beautiful dark amber color which does make me smile, I am however quite hesitant after our first encounter.

It'll all be alright. Give it a nose.

A beautiful, albeit typical sherry nose on this whisky.

Much better then our first attempt!

Big, very big whisky with again many typical sherry whisky flavors. A tiny amount of chocolate, but lots of red fruit and spices, sultanas and raisins with again lots of spice, however there is a wee bit of vanilla in there as well.

It's both BIG and yet easy drinking at the same time.

A very long spicy finish that again reminds me of Christmas with lots of cinnamon and nutmeg, but with vanilla finishes this whisky.

Is it alright to say that this whisky made me smile?

In fact this whisky made me want to go out once again and retaste the Glenfarclas 105.

Sadly though I've never seen this bottle for sale in Australia and considering that it looks like the average price of it sits at around $300 AUS a bottle, BEFORE Customs and shipping I'd expect to easily pay between $350 and $400 for it.

It's a REALLY nice whisky. Don't get me wrong and if I was living in the UK, buying whisky at UK prices I'd more then happily pick it up, especially considering the fond place in my heart that I have for Glenfarclas.

However is it $400? No where near that in my opinion. I'd much rather spend 1/4 that and get a whisky that's just as good, if not as old, Aberlour Abunadh.

However if you ever get a chance to try this bad boy out, make sure that you do!

I'd been keen to try this, rather enjoying the regular 105, though not wanting to shell out the bucks for a full bottle of the 20 year old. I found some 30ml samples for sale and got two.

Nose: Toffee, caramel, and dried fruit. There's more of a perfumy floral quality here than there was on the standard 105. Not as robust as I'd have expected, but still nice. Oxidative sherry note, honey, syrup, and vanilla. (with water) a bit non-descript, honey, praline pie, more dried fruit nibs, vanilla, and subtle baking spices

Palate: very hot -- still discernible flavors of honey, bitter coffee, wood, and some red fruits. Maybe some water will open this up. (with water) rather straightforward. More honey, wood, and a limited amount of fruit and... this is a very Scotchy scotch. Yep, these notes are very helpful, aren't they?

Finish: fine and pleasing, but unexceptional. The regular 105 was more dynamic, even if this had a longer finish on coffee. I'm surprised how subdued this was at points and thought that this really might have opened up with greater complexity with water. 84 pts here