Average score from 6 reviews and 16 ratings 77 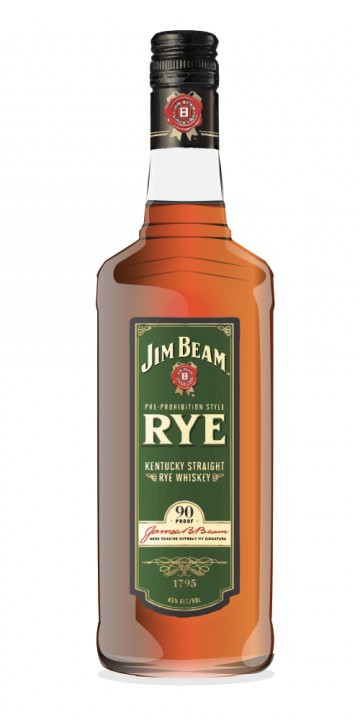 We like a nicely mixed Manhattan at Casa Demoncase, and to do justice to a real Prohibition era Manhattan like we enjoyed in the Waldorf on our 10th wedding anniversary Rye is needed. Choices on this side of the pond are scant- Bulleit Rye turns up on occasion but this Jim Beam had slipped under my radar until recently.

Took a nip, neat, in my balloon glass to see if this was money well spent.

Colour- Appears darker that I imagine a rye to be- especially next the yellow label (thoughtful marketing perhaps- similar to how drinks packed in red cans taste 'warmer' too us?). In the glass- a deeper honey brown.

Nose- A lot of alcohol astringency and very, very sweet. Piles dried hay, pale fresh-cut wood in the sawmill (or shed if you prefer). Sunshiney- if that's a word- but the dry sunshine of an autumn day. Some sourness toward the very end.

After about 10-15 minutes in the glass it warmed up and I was starting to get a deep, sweet, vanilla from my tableside. A real pleasant perfume- not room filling, but it was beckoning me back to the glass for sure!

Flavour- Amazingly sweet- almost sugary, light, initial alcohol burn numbs a bit. Very dry and woody. (Mrs Demoncase loves Pendyryn Peated and remarked on some similarities here) I want to say 'popcorn' in there too. Lots of light woods- cigarbox-y/cut wood at the back of the tongue. Maybe a hint of wicker (if you've ever handled a 1970s wicker drinks coaster, you know what I'm talking about!)

Not detecting the vanilla as a stand-out 'spike' of flavour (like I might with a bourbon) but it's more the background that the woody/popcorny bite floats about on. Sourness from the nose comes through as you swallow with maybe some pine?

This doesn't have the range of flavours or layers that my usual bourbon choices do have. The finish is- in keeping with how light the whole thing is- super short. Light to the point of thinness in the mouth, and I expected an oilyness from the colour which never transpires.

Not mixed this puppy up yet- but I can see the dryness making a fearsome good Manhattan.

For the price at £20, it's fit for purpose and an interesting tipple in it's own right. I prefer the Bulliet Rye for it's deeper flavour and greater grassiness, but I can pretty much get 2 JB Rye for the price of one Bulliet- and when I'm mixing, that seems a shame.

Update: Mixed a couple of Manhattans with this tonight (properly shaken too I might add!) and as predicted it produces a richer, darker and drier flavour profile than when made with a Bourbon.....Very easy to drink.

Sure I love a bunch of barley-malt whiskies, but...Rye is still my favourite whisk(e)y style. From my first taste and bottle of Jim Beam Yellow Label Rye Whiskey, the rye styles have claimed my top 3 favourite whiskies ever, with the exception of that taste of 40 yo 1967 Duncan Taylor Springbank malt

That was probably early in 2009, and the Jim Beam Rye I was drinking was probably bottled in 2008. It was brisk and very brightly spicy even sold at 40% abv

Much has changed in the world of US Rye whiskey since 2009. In those days it was still true that almost no US liquor stores had more than one, two, or three US ryes in stock at a time. And those ryes were only made by a small handful of distilleries: usually Jim Beam, Wild Turkey, or Heaven Hill. There was Jim Beam Yellow Label Rye, Wild Turkey 101, Rittenhouse 80 and 100 proof, and Pikesville Supreme, 80 proof. That was about it. Yes, if you were extraordinarily blessed maybe you would encounter some Van Winkle 13 yo rye

In the last 2 or 3 years demand for US rye has increased so much both in the US and worldwide that there have been shortages of even some of the basic products, such as Sazerac Rye and Wild Turkey 101. Where I live, Rittenhouse 100 proof comes in, sells out in a few weeks and may not be seen for 6 to 12 more months. The increase in popularity for US ryes has been fueled primarily by US bartenders who have for the last 10-12 years been using rye more and more in their cocktails. Secondarily rye has also become popular with connoisseurs, particularly those who like big flavours. I like to say that the average member of Connosr.com who reads the rye reviews knows far more about US ryes than 99% of American domestic whiskey drinkers. I doubt that 1% of US bourbon drinkers have ever tasted a drop of rye whiskey outside of a cocktail

The reviewed bottle of Jim Beam Yellow Label Straight Rye Whiskey was purchased about the fall of 2011 and has been open since that time. It is 80% full and preserved for the last 2 years with inert gas

Nose: this is mostly toward the dry side, as most US ryes are, with some vanilla from the wood noticeable. This particular bottle, like a lot of multi-year opened bottles of US rye, has actually gotten fuller, fruitier, and better with a lot of air exposure. The two characteristic flavours of rye grain, those of spices and dark fruits, are abundant at this point, though they were not so obvious in the nose in the early period this bottle was open. The spices are a combination of the baking spices of cinnamon/cassia, cloves, and nutmeg,...and also black pepper. The fruits are typically plums and black cherries. At this point this nose would rate 22 pts from me, while at first more like 19 pts. I will compromise at 21 pts on aggregate

Taste: the flavours are strong and do translate from the nose, but dilution to 40% abv does this whiskey no favours. There is a thinness to the body despite the adequacy of the strength of the flavours

Finish: most of these flavours last no more than a medium length, which I believe is also influenced by the dilution. This whisky skews a little bit toward the sour side into the finish

This was my first rye whisky so there was some suspense in the air. That's why Agatha Christie's A Pocket Full of Rye is more than suitable as my movie reference (yes, there's been a TV movie about it).

A Pocket Full of Rye is exactly what this Jim Beam dram is. Even though I hadn't tasted rye whisky before, I knew what rye was about. A very popular grain for us Finns.

I must say, I'm gonna like rye whiskys. I started with a cheaper one and it tasted okay. How good can it get with the top players of rye whisky?

Finish: Short and spicy, feels like a quick breeze of peppers and barbecue spices on its way down.

Balance: Otherwise pretty mellow but strong on the taste because of the rye.

@Rantavahti, it gets mighty fine indeed with "the top players of rye whisky". Welcome to the Rye-whisk(e)y loving crowd!

Coming form the world of single scotch malts, I've tasted this one as my first american whisky and rye in general. The cheap price and the decent reviews created a somewhat mixed feeling of what to expect, though. So here are my thoughts:

Nose: at first i thought Rye, Rye and...Rye. Very spicy, quite complex (or unsusual based on my experience) but also a little Vanilla and sweetness in the background. The longer I smelled it and after some sips, it got a little more balanced in my nose but still quite new terrain. (19)

Taste: Quite strong and intense Rye. Spices and wood. No more sweetness. But quite nice and tasty ;) (20)

Finish: Average length, quite warming, a little dry, lots of wood and oak, still spicy. In the final 3rd a lil bitter. (20)

Balance and conclusion: In my opinion not a very well balanced Whisky. (18) But a very nice entry point to the world of Rye Whisky at a decent price. Aromas are quite limited and even at 40% it feels quite strong. However, this all could be a lil influenced by my first real Rye experience ;) A nice dram though...will continue to check out higher quality Rye's to get a better feel for it.

Very nice review. Jim Beam Rye has recently varied a lot year to year, as Jim Murray has noted in his Whisky Bibles. The 2008 release was actually MUCH spicier than the currently available Jim Beam Rye, for example. Where I live, in Maryland, which is part of the original US straight rye whiskey distilling region along with Pennsylvania, 40% 'standard' ryes like Jim Beam Yellow Label, Old Overholt (a Pennyslvania brand now also distilled by Beam in Kentucky) and Pikesville Supreme (Heaven Hill distilled, a pre-Prohibition Baltimore brand)cost $ 10-15. They are, depending on the year-batch, often quite good, and would, I think, be amazing if they were bottled at 50% plus and not diluted down to 40% abv. As a rye-ophile I keep hoping that Beam and Heaven Hill will follow Buffalo Trace and some other distilleries and give us some undiluted and less-diluted rye whiskeys to enjoy.

The nose is full of lovely spices, with deep and powerful wood aromas. The taste though is overly sweet with only mild bamboo notes in the taste. The finish though is overwhelmingly full of burnt grains.

Jim Beam Yellow Label Rye is a little dilute at 40% ABV, so you can find a lot more rye intensity in the less diluted rye whiskeys. It was more fiery in flavour in the 2008 release than in 2010, but it is still sippable. I loved it from 2008, but it is still enjoyable now. This from an unabashed rye whiskey aficionado. This was the first rye that I tried, and it turned me towards that rye spicy flavour profile as my number one preferred set of flavours. It will be interesting to see whether the fall 2011 release goes back to its more intense self. Jim Murray will probably comment on that in his 2012 Whisky Bible.

@Wodha, yes,Jim Beam Rye is quite a bargain, as are Old Overholt (also Beam produced) and Pikesville Supreme (Heaven Hill). Over here in traditional Rye distilling country none of these costs as much as $ 11.

Fruity, sweet, lingering tones of cinnamon. The low price doesn't reflect what's in the bottle. Better than other ryes at twice the price.