Average score from 11 reviews and 29 ratings 78 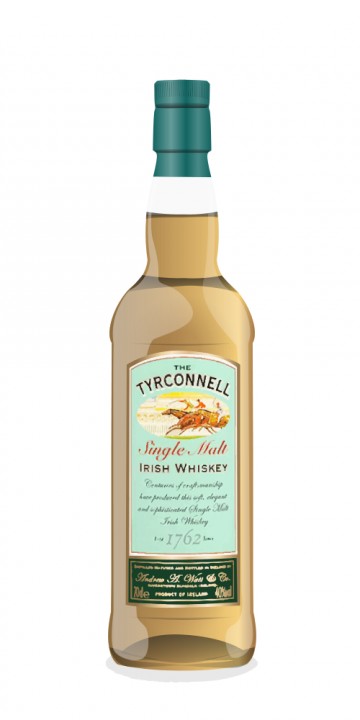 OK so this review comes five months late (it was a birthday gift from my parents), but hey better late than never! This is a refresh of the standard Tyrconnell single malt, but now moved up from 40 to 43% ABV (it is also double, not triple distilled). I have some of the 16 Year Old still left (46%) so let's do a quick comparison.

Citrusy on the palate, with more oak than I got on the nose. Slightly spicy with hints of vanilla and caramel. Lots of lemon going on here, almost like a lozenge. Very light honey. Soft mouthfeel. Water brings out more spice and some bitter salivating oak. Even more elegant than the nose, the subtlety here is almost to a fault.

The finish has tons of lemon, with white pepper and buttered rye toast. Compared to the wonderful 16 Year Old, the standard bottling is lighter and maltier, but both have a lot of subtlety (though the 16 is much fuller bodied). This is a beautiful, crisp and clean malt that, despite not being triple distilled, epitomizes what makes Irish single malt what it is.

@cricklewood Thanks! I don't think I knew that Cooley only distilled twice....interesting. Yes, Bushmills triple distills, as does Midleton and I think most other Irish distilleries.

Well written man, your Irish whisky reviews always have me interested in trying these expressions.

Especially at this price point it is worth taking a chance. I've always enjoyed the Cooley single malts I've tried, which has mostly been in the form of various Teeling releases. It would be nice to try a more natural presentation.

From what intel I've gathered it would seem that Cooley always double distilled its single malt, it was mostly Bushmills that triple distilled it's SM

Named after a famous racehorse this is a non-age statement single malt whisky, double distilled and bottled at 40% and, like the Locke’s, a light gold in colour. Interesting aromas of vanilla, acetone and honeysuckle. Some warmth in the mouth with hints of apple and a flavour identified by some as “sponge cake” - maybe a little on the bland side. A medium, drying, finish with some pepper at the end.

I bought this whiskey to have something to compare my Bushmills 10 with. I was not disapointed. It is fresher and full of flavour. On the nose it's fresh: almost lime-like, vanilla, herbal. The taste is sweet, very smooth, some citrus tones, a little caramel. Not very deep or complex, but friendly and easy. The finish is smooth, not very long, but it invites you to another sip.

I waited with anticipation for this special order, with the expectation that for $48.00 it would be a rare treat. My bottle of Tyconnell was not a taste sensation, it was more like an Irish bomb. It smelled peculiar. At least every other Irish Whiskey I have tried had some kinship from Bushmills to Tullamore Dew, but not this demon brew. The smell was akin to an industrial solvent. It has an astringent quality of odor and taste. Its medicinal character is one that warns the user that this liquid should not to be taken internally. The taste is God awful. There is Poteen that has more character and aging. The only drams I have purchased that tasted as bad are Midnight Moon and Buffalo Traces' White Dog. If at a bash everyone is already "half in the bag" then it is time to bring out the Tyconnell and tell them what wonderful spirit it is in the hopes no one will notice. A friend suggested it be used for Irish coffee so long as the coffee was an espresso. Should anyone consider giving up drink, this is the whiskey to make it stick.

Wow - that is the most scathing review I think I've ever read! Is this the standard Tyrconnell? The only one I had was the Port Finish (if memory serves) and I was not crazy about it. I've heard great things about other expressions though.

i was pleasantly surprised how refreshing and smooth Tyrconnell Single Malt is.. Its full of hot buttered toffee sweetness with a bit of hiney and grassiness in there. Kind of like a IPA for a split second.. Fruity!

This Irish Single Malt caught my attention as I rushed through the airport duty free. I whipped out the cc, grabbed the bottle and ran to the gate. $43.

Would probably be a very good whiskey to incorporate marmalades recipes.

What wood notes there are here seem to be overtaken by the generally very high pitched collection of flavours present, mostly the citrus-zest effect. I think that the Tyrconnell Malt would greatly benefit from some more bass notes from the wood. The various wine finishes which Cooley has applied to this whiskey seem to be quite effective in giving it a more grounded feeling. And in return the wine-finished Tyrconnell whiskeys sell for triple the price.

Tyrconnell is the name of an Irish racehorse that won the Irish Produce Derby in 1876 at 100-1 odds. The review sample is the basic 10 yr old Tyrconnell Single Malt. There are also Port, Madeira, and Sherry finished versions. Tyrconnell is distilled at the Cooley Distillery in the Republic of Ireland

Taste: there are many very high pitched barley malt grain notes here. There is some wood flavour, but it stays mostly in the background. This whisky is sweet, but has a strong counterbalancing sourness in it as well. A gentle pear flavour is also quite noticeable. This is a whiskey of mostly high and middle notes

Finish: the flavours last rather long, and diminish rather slowly together at about the same rate

Balance: I would enjoy this more if there were stronger wood notes to anchor the flavours and give a balance to the high and middle notes. The flavours here seem incomplete to me

A well described review of this bottle, @Victor! You detailed the sensations of counterbalancing notes that I experienced with this dram.

I had a double sized dram of this (I believe from a just opened bottle) prior to the Buffalo Sabres game I attended yesterday (a great deal, as I was only charged for a standard serving). I also noticed a light smokiness to this offering (likely from the wood notes you describe. I was happy to try a dram, though I am on the fence as to whether to buy a bottle (a very reasonable $48 at the LCBO).

Sweet, soft, and chewy Irish whiskey with extra malt that leads to a wonderful finish.

The Nose: Soft, floral, and fruity nose. Light molasses and creamy grain balance well with red delicious apples and tart lemon icing on lemon-vanilla cake. Just a touch spirit-y, not off-putting though, it comes across as a subtle hint of candied licorice beneath the stronger notes.

The Palate: Wonderful, honeyed, slightly syrupy entry with apples and crisp, toasted rye bread-like grain which brings a subtle spiciness while juicy citrus notes bring a nice mouthwatering acidity. Towards the end, there are faint cocoa nib hints that add a mild earthiness.

The Finish: Medium-ish, the spicy dies off pretty quickly, the cocoa, honey and citrus lingers a bit longer.

Thoughts: A very pleasant Irish, it’s subtly complex and delivers a really nicely structured and balanced mix of grain and fruit. Because it’s a single malt, I was expecting a bit more weight, there are definitely richer, bigger Irish whiskies out there. Still, this is a delicious, smooth, really drinkable malt and would be a great after-dinner dram for a warm summer evening. I see this around my neck of the woods for around $30, which makes it a pretty good value and definitely worth trying if you like Irish whiskies or unpeated Scotch.

Nice review ! I have a bottle too... it reminds me of Cragganmore 12yr, but less intense. I also agree that it is very good for the price. There is also a Tyrconnell 15 year I'd like to try if I ever see it around here.... Cheers !

Nice review. Picked up a bottle for St. Patty's day. Really enjoyed it. Reminded me of Knappogue Castle but more woody. I wish the LCBO had more of their offerings.

The Tyrconnell has no age statement, but it is a single malt, and bottled at 40%. That's a bit light on the alcohol when compared to many Scotch whiskies.

In the glass, The Tyrconnell is a light straw-gold, quite pale and pretty. On the nose there is a little pungent alcohol burn, and a definite malty aroma -- it has a biscuity, cake-like scent. There's some aromatic lime and a touch of honey. It's a very appealing, gentle nose. My wife Grace detects fennel or licorice in it and says there is something that reminds her of "vaseline, but not in a bad way."

On the tongue, there's an immediate sweetness and roundness that is very pleasant: shortbread or biscuits are definitely up front, but there is more to it than that -- the finish is light on burn but long on pleasant citrus notes, like lemon taffy. There's something like tart green apples; there's yeasty breadiness, like ripping open a fresh baguette. There are apricots (sulfured, but the sulfur is not pronounced or unpleasant). And that mouth feel is really exceptional -- it's not oily exactly, but syrupy. This has one of the best mouth feels of any whisky I've tasted.

With water, the nose opens up and that malt and yeast become more pronounced, and I get an Irish oats flavor, as if I were chewing on some rolled oats. That vaseline feel on the tongue is even more pronounced and it reminds me of... wait for it... processed American cheese singles! (That's the slight petroleum-like flavor combined with something umami, like pickled plums or a faint whiff of soy sauce or fermented black beans).

Now that's a bit strange, but not unpleasant. Grace says "grassy, and nougat candy." It sounds like quite a confusing set of flavors, but it all harmonizes quite well, and in fact the reason it is possible to explore so many flavors in this whisky is because none of them are overwhelming. I actually prefer it with water, so try it both ways!

I'm a fan , first had this on a visit to ireland...not sure you should say "compared to many Scotch whiskies" as this is an Irish Whiskey...maybe I misunderstood your meaning or context..but Scotch can only be made in scotland...and if tyconnell is made in ireland..it certainly is not Scotch..nor should it be directly compared to it...I found the tyrconnell to be smokey and sweet. enjoy

I'm a fan of Tyrconnell. Under rated.