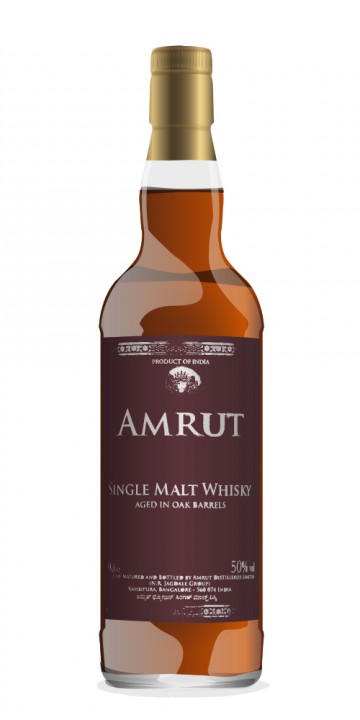 The online whisky retailer The Whisky Exchange bottled this Amrut Special Reserve for their 10th Anniversary. It's ABV is an amazing 63%, slightly higher than the official cask strength that I've tasted recently (and found outstanding). I think I'm in for a treat! This one is much darker, though, almost bronze. I'm thinking this is a sherry cask, but am not yet absolutely certain.

Oh, yes, the nose is great. Apple cake, honey, caramel, plums on rum, demerara sugar, cream and a bit of furniture polish. Even a whiff of smoke, but that might be merely my imagination. Slightly peppery and oily. A truly grand nose... and I'm convinced of the cask now. After adding some water, it gets even fruitier with primarily dades, raisins and plums - you get the picture: a whole range of dark fruits.

Despite the high ABV, which delivers an peppery attack, it's quite drinkable undiluted, albeit a tad dry. Plums on rum, malt and oak. It makes it sweeter still, and less oaky. A good thing. It's a swimmer, so add water.

Undiluted, the finish is strong with a touch too much emphasis on pepper, but diluted it's malty with sweet undertones of honey and rum.

Admittedly somewhat uncomplex, but very much alive and kicking. And not even 50 quid, which is a steal for a beauty like this.

It is! And a real bargain, too.