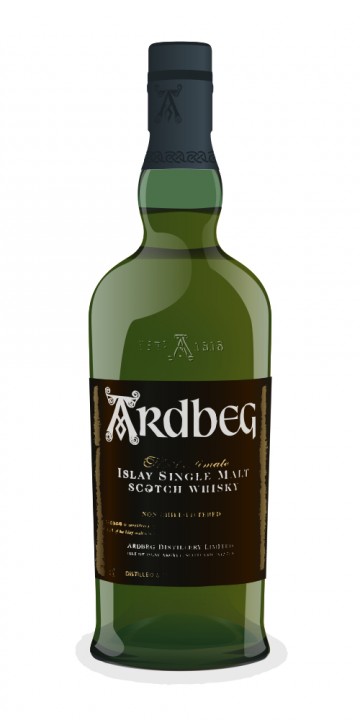 I think by now everyone's read about my trip to Islay for the Feis Ile so I won't bore you with the details.

What is pertinent, though, is our annual pilgrimage to the Kildalton Cross, a few miles ahead of Ardbeg, with the aim of toasting something special. This year there were seven of us. Which was both a good thing and a bad thing.

Good because more the merrier.

Bad because we decided to drive down to the cross in a single Volkswagen Passat. Let's just say everyone had their privates mashed against someone's rear at all times. There were violent complaints followed by uncontrollable bouts of laughter as we made the agonising 20 minute drive from Lagavulin.

The only person unaffected was my self. As the designated driver for the day I had the enviable position of sitting comfortably in the drivers' seat and laughing at my friends' discomfort.

I had procured this bottle in Dubai and gingerly carried it in my luggage all the while hoping and praying nothing would happen to it. Luckily the whisky Gods were on our side. The bottle was unscathed. The day was beautiful. Everything was perfect in that moment.

This vintage Ardbeg was released soon after the new ownership had taken over the distillery. Released in 2000 my sample is from a brand new bottle and served at 43%

A fading peat. Soft and in the background. Not as earthy as I thought but more coal smoke. Old leather shoes. Almonds. Walnuts. Organic kale chips. Salty kale chips. Yemeni honey. After a while becomes quite malty. Cereals. The tender oak is next. Becomes a touch floral over time. Dried lavender petals. Like potpourri. Heather. Such a distinctive old school style of spirit. No sharp edges. Everything married as one well rounded robust offering.

Bloody hell. This just keeps getting better and better. One of the more magnificent finishes I've encountered in a long time. Just stays in your mouth and refuses to dissipate. Hints of vanilla. The soft peat. And, of course, the divine oak. Love it.

A truly world class whisky that harks back to a bygone era of whisky making. There's an aged softness to these old school spirits that I've noticed that might never be replicated. There's just too much time and care taken to produce these kinds of gems to make them successful in the modern world where everyone is impatient and has the attention span of a Jack Terrier on cocaine. And, frankly, even if they do I doubt us lesser mortals will be able to get our hands on it anyway. Such is the world we live in.

Igor K. and I are convinced that the quality of the BARLEY was far superior pre-1980 to what it has become later. Lower yield more flavourful strains, and floor maltings with Tender Loving Care and far more personal touch. There is a different flavour to these Old School malts which is lovely. That difference is even more noticeable in malts which are light on peat or wine, like Clynelish and Linkwood, but you certainly do notice it in these 1970s distilled Ardbegs too.

One question, though: as driver were you trying to hit all the potholes and ruts in the road with gusto for effect?