Average score from 1 reviews and 2 ratings 93 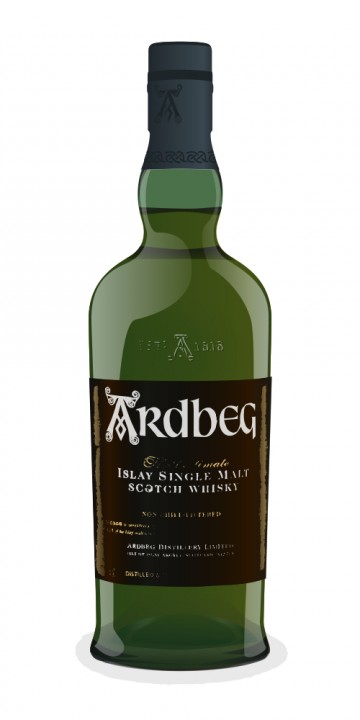 Why two backs? Well, you know what they say, "Never turn your back on a wild animal," and this whisky is somewhat wild, and my friend and I were "taming" it so to speak by finishing a long lost bottle that turned up. Once the bottle was drained, however, we sadly put it on the counter by the sink, and turned to other bottles with some water of life left in them.

I'm not sure the bottle we drank from contained the 2006 or the 2007 bottling. It said 1990 on it. I will check later, but I suspect it was the former (2006) because it was an older bottle that was opened last year with some amount of dust on it, according to my friend.

Since Beist is "unobtainium" at this point (yes, an allusion to Avatar the film), I won't go into a lot of detail with tasting notes. Both years of this scotch were fantastic offerings by Ardbeg and I feel the Beist was indeed superior to today's Galileo, even with all of the space bells and whisles. It still remains my favorite Ardbeg. Call me a lightweight if you will. I like it better than Aligator, Uigie and all of the other Ardbuggery "hard stuff" so to speak, which I also like a great deal, but not as much as the Beist. This said, the older first run of the Uigie was comparable, but it isn't today with the young stuff in it. I dearly love the first run of the Uigie. If asked, I could not pick a favorite between that and the Beist.

At any rate, the Beist is/was Effing delicious stuff. If you find some at a bar, buy a glass and treat yourself. Just last Sunday eve, a friend of mine brought her bottle over to my house and we drank a few last glasses together.

Last Sunday eve was a mournful occasion in one respect due to the fact that Beast has laid its head down once last time, and died a very quiet and dignified death in my home, never to be seen again, but then again tasting the last few drams from the bottle was also quite uplifting and invigorating. Special thanks to Val for bringing it over!

And, yes, time had dulled the Beast somewhat. It had oxidized a bit, but even still, it was just smashingly brilliant and it reminded me of the power of Beist in its prime that I had tasted so many times before.

Excellent! My favourite ever whisky without question, (tops Laphroaig 15 and Bowmore Bordeaux 16yo which are the only two to run it close). I've drunk two bottles of it previously but couldn't tell you whether they were 2006/07/08 variants

What I do know is I have a 2008 Nam Beist sitting unopened and on display in my living room. It's been there for nearly two years and is one of the biggest tests of willpower I have ever endured :) It now costs more than twice what I paid for it, but unless it reaches silly money, (like 4 figure prices) I will be drinking it one day.

Make sure that bottle of beastly goodness is not exposed to direct sunlight for too long, even with the green hue in the glass.

You must trust those who come and go through your house to keep such a precious treasure on display. Well done, hear hear.