Average score from 5 reviews and 6 ratings 90 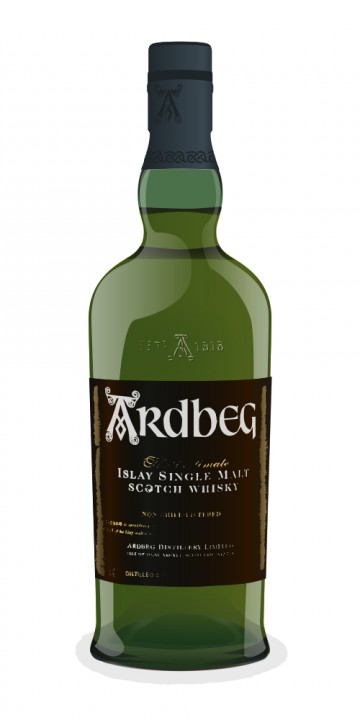 This particular review is about two years in the making. When this 2012 Fies Ile came out there was a mad rush by Ardbeggians (ArdbegHeads / BegHeads - take your pick) around the world to snag a bottle or two.

Luckily I was able to procure a couple for my self. I had a taste of it soon after and remembered not liking it much. Far too flinty for me, if you know what I mean. Had another taste a year later (from the same bottle) and the flintiness had mellowed a touch. And then finally another sample (same bottle) one more year later and it began to work.

Now I honestly don't know whether the changing spirit was just me or some sort of chemical trickery. Unfortunately I didn't keep notes for the first two times (I wish I had) because they would have made for some interesting comparisons.

Regardless, here's what I think about it the third time around.

The spirit is a mix of eight, nine and twelve year old bourbon casks married in a sherry butt and left to develop.

Nose: There is that initial spent match / flint spark I had been getting the first two times but now with less intensity. I think letting this one breathe is best because that smell dissipates letting the others come through. Quite oily with a thick brine on peat. Brushed with a coastal sea salt. The sweeter notes come through next with an acrid green apple and young grapefruit sharpness. Still not my favorite nose.

Palate: Quite peaty with an earthy bonfire ash quality to it. Not entirely terrible, mind you. I like the citrus on this one; it's like a dark orange covered in melon rind. The coastal sea salt is back and with it some white peppers. If the spirit was weaker these flavors may not have worked but the full bodied mouthfeel lends support.

Finish: Dark chocolates and spicy licorice. I would have liked it to have been longer but if medium is what Ardbeg wants then medium is what I will have to live with.

Is this my favorite Ardbeg? No. Is it worth the mad rush in June every year. I don't think so. Do I want it on my bar, regardless? Yes.

Such is the allure of this distillery.

I tried a glass of this last week. I was disappointed. A very well known whisky expert highly recommended it to me. Alas, it did not live up to his recommendations. Oh well. It was certainly fun to try a glass. I, too, would rate this one at about an 86/87. Would I buy a bottle? No, but then again they are very hard to find (and not worth it, IMO). I currently own an unopened Alligator and a 2009 Beist, along with a 2007 Uigeadail and a mid-2012 Uigeadail. I'm happy with those bottles that will last me for quite a while when it comes to Ardbegy cravings from time to time. Thanks for your review, Tabarak.

A very well know whisky expert recommended this to me as well. I'm talking about Mr Murray when I met him last. Needless to say I was quite underwhelmed especially since he named it his Whisky of the Year in some category.

And I'm assuming we tasted more or less the same liquid as I doubt there is any major batch variance with a limited run like this one.

From the website: "Specially bottled to celebrate the inaugural worldwide Ardbeg Day, this is a dram that sports a myriad of fine aromas and tastes. As well as its extremely drinkable qualities, it’s the required apparatus for those Islay-limpians who enjoy partaking in the Glass Lifting event*."

So similar to the Uigeadail, but that one is such a temperamental pain in the butt. This is softer and easier to enjoy. Let it breathe a bit more and it could turn into one of the all time great.s

Worldwide, Islay-limpics were held on the so-called Ardbeg Day on 2nd June 2012. In Belgium, there were several festivities where you could taste the new release. To get a hold of a bottle, that was something else. But as Ardbeg Committee Member, I succeeded in securing a couple of bottles. Ardbeg Day is a combination of 8, 9 and 12 Year Old bourbon casks, married for 6 months on sherry casks.

The nose starts sharply on paraffin, tar and cow stable, but then opens up beautifully on burnt toffee and marshmallows over a campfire. A lot of earthy notes and flints. Spicy on dried ginger, vanilla and woodspice. Not much sherry influence on the nose.

The attack is very spicy (pepper and cinnamon and again dried ginger), waxy and hot. Toffee turns butterscotch, tar turns iodine. Charred wood. Slightly drying, now, with a wonderful hint of brown sugar and caramelized apple. The peat is anything but subtle, the sherry rears its head now. Great pinch of salt.

The finish is more than decent in length on dried fruits and coffee beans, with a bit of mint and dark chocolate on the deathbed.

Wonderfully drinkable Ardbeg, that rivals the Rollercoaster and Alligator. Unfortunately completely sold out at the moment. So let us look forward to the Ardbeg Galileo, the next release of this popular distillery.

Just been trying this myself Mark, wonderful stuff. I was getting some fruit which reminded me of grapefruit pith until a fellow taster mentioned rabbit hutch straw, then by auto suggestion that's all I could smell! I love it though, and need to get some Uigeadail to taste it against.

Hmm, you would need to taste them H2H, I presume. I did not do that. However, from my notes, I can see that I prefer the Uigeadail. And let's not forget a nice little detail (that I forgot to mention before): the casks used to marry this Day were in fact ex-sherry casks that had previously been used for the Uigeadail. So it stands to reason that they are similar.

My wife and I had been attending a whisky and chocolate pairing at our local whisky bar, Helvetica, late one night when I saw a couple whiskies on the drink list that caught my eye.

Well to be honest I saw more then a few that caught my eye.

More like all of them kinda caught my eye.

But since I couldn't afford to purchase them all, much less drink them all, I decided to grab just a couple of extra drams that were rarer then the average tasting.

Those were George T. Stagg and the newly released Ardbeg Day whisky.

Now when we'd decided to do the whisky and chocolate tasting I was hoping to snag a bottle of the Ardbeg Day release. But I couldn't get the price.

I was able to find out that I wouldn't be able to take the bottle home with me though.

Especially after I saw the price for a bottle.

I mean it's likely to be good, but almost $300 dollars good?

But I eagerly purchased a dram, read the bottle while waiting for it and tried to snag some photos of the bottle using my mobile.

Did you know that most bars are really dark.

And for some reason darkness isn't the best condition for taking pictures with your phone.

I hate to break it to you, but if you're holding out for some pictures you're going to be mighty upset with me.

But if you're here for a review man I do believe I can help you my friend!

So I finally get my dram and head back upstairs to join my wife.

She grins at me as I come bounding up the stairs with the tasting glass held carefully in my hands.

I plop down next to her and look over at her.

"Very" I reply which earns me a light elbow in the gut.

So we decide to start nosing the glass. I've been hoping to be able to linger over all the whiskies we tried tonight, but we knew this wouldn't be the case so what I'd done was every 20 minutes or so I would try the next whisky in the line.

The goal here was to be able to have the maximum amount of time to spend with the Ardbeg Day whisky and the George T Stagg.

So I decided to linger a bit over my newly acquired dram of Ardbeg.

Nose it a bit, say hello to it, you know, become friends with my dram.

The nose is lovely and very typical Ardbeg, but not.

There's the peat, there's the typical burnt bandaids, but quite a bit of sherry sweetness along with vanilla and some spicey cinnamon.

Once again a very complex nose from Ardbeg!

Whenever I try an Ardbeg all I feel like I can say is...YEE HAA!!

I then decide that with the nose being so lovely I have to give it a taste!

The flavors are absolutely brilliant! You get the peat and smoke, but the sherry is singing it's lines in the chorus too and isn't overwhelmed by the peat and smoke. Creme brulee and fruits are also throwing up their voices in the song that is this whisky's flavors. This is a very rich and lovely whisky!

The finish is awesome with fruit and smoke and sugars lingering on the tongue for quite a while.

Can I say again that this is a lovely whisky?

Once more I'm left feeling so disappointed that I can't afford to snag a bottle for my own collection. I'd really love to see how this whisky opens up over time.

But almost 300 dollars is too much for a bottle of really good, but not perfect whisky.

Even more disappointing is that this is a limited release whisky so odds of me being able to snag a bottle and take it home are bloody rare.

But maybe not so for you my friends! Maybe you can snag yourself a bottle!

Will admit the Ardbeg Day was a very good whisky, which left me wanting more, as I only got half a dram though from the now empty bottle at Helvetica, hopefully they can find another bottle before my next visit in a fortnight's time.

Helvetica's "bottle" price, is the price to keep a "bottle" behind the bar for you, so it is bar price not retail price of a bottle.

The George T Stagg was an interesting whisky to follow it with (I have also enjoyed that at Helvetica). For me I was drinking Islay whiskies and it was the Bruichladdich Octamore 2nd edition, which packed a solid peaty punch, I much preferred the sherry finished, sweeter and more subtle Day.

Hahaha! Thanks for the kind words. I'm sorry to hear that you weren't able to find a bottle. I think most of us were sadly in that boat of either: Can't find or Overpriced.

I'm really hoping next year will be better and plan on emailing Ardbeg and seeing if I can't just have a bottle shipped in to me.

A first tasting of this year's special Ardbeg day dram. will be available June 2nd in many Ardbeg embassies worldwide. worth a try. lovely.

Palate: wham. Very powerful. Hitting on peat burnt sugar espresso and ginger. Smoke and ash are there alright. On the second wave burnt crust of creme brûlée and dried fruit. Creamy and savory. It's like the uigedail but a tad darker. Yet the oloroso stands out. Creamy. With water it's getting more fruity on the dried fruit and sweeter !