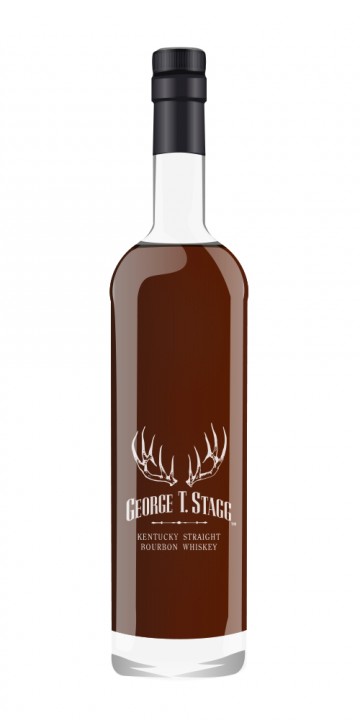 This Stagg was distilled in Spring of 1997 and aged in warehouses I,K, and Q. It's one of the weakest Staggs released in years in terms of ABV.

Taste: Big body and weight on this. It's dry and spicy. You get flavors of raisins, the dates, prunes, along with rum, barrel char, anise. However, it's somewhat sour.

Finish: Hard candy. anise, char. The finish is rather creamy and very long.

This Stagg is still a very nice Bourbon but I feel that it's weaker than previous releases. Maybe my expectations are just too high. At any rate, this is a fine pour just not the best of the Antique Collection.

George T. Stagg is almost the only whisk(e)y in the world which can raise eyebrows having its alcohol by volume reduced below 70% ABV. That is because the 2010, 2011, and 2012 releases were all released at above 71% ABV. Even for a Big Flavours Guy like me, 64.1% ABV is certainly an adequately powered beverage, though, truth be told, I consider 68% to be the optimum bottom level ABV for my tastes

The reviewed bottle has been open for 9 days

Nose: strong sweet maple is the predominant smell, with floral scents of carnations, roses, and even gardenias. Fine high-pitched spice from rye grain includes cinnamon/cassia and nutmeg. A hint of that 70-something % corn content is perceptible beyond the wood and the rye. Confectioner's sugar. Beautiful nose. Water accentuates the floral elements and merges the flavours

Taste: rich translation of flavours from the nose with the addition of black licorice...and sassafras/root beer. Very rich, lush. Wonderful, except that this wood then starts to bitter, which detracts from an otherwise excellent batch of George T Stagg. Water accentuates the wood bass notes, which in this case means adding bitterness

Finish: intense, flavourful finish, long, but settles in on unacceptable bitter oak, as did the 2013 release of the Stagg Jr Whiskey. Bourbon is never supposed to leave a bitter taste in your mouth. This one does

This is still a damned good bourbon, but a bottling of George T Stagg Bourbon should be, and usually is, better than this

These ridiculous 'status symbol and collector's' prices make people hate whiskeys which they would like if they cost an amount they could afford. Below $ 125 per bottle any Sazerac Company/Buffalo Trace Distillery Antique Collection whiskey is a wonderful acquisition and an excellent purchase. It is a shame that it is so damned hard now to pick up a bottle of it at all, much less at a decent price of $ 100 or less.

I finally found a bottle in the wild. Saw a Stagg on the shelf behind the register and did a double take. I asked the clerk how much they were asking for it...he scanned it in and the register displayed $489.99. Ouch. I left empty handed, although I did think about it for a minute.

This year's GTS was released with a lower abv than last year's, but still clocks in at a respectable 128.2 proof. Still dark and intense looking in the bottle. I can wait no longer. Let's see how it goes down.

It has a great nose, that's for sure. First, I get syrup coming up behind the heat. This evolves into toasted coconut and chess pie (a southern treat).

First sip is spicy, with a slight burn. Next sip, I like to hold in my mouth for a while and slowly swish it around. Nice. Butterscotch. Pralines and peanut brittle. Mouthfeel is rich and thick, like watered down syrup.

Finish is a long, slow burn. It ends with maybe a touch too much bitterness or maybe a slight sour after taste, but that is easily remidied by another quick sip.

When i finish my glass, I am thinking breakfast: Pancakes or french toast drizzled with warm butter and lots of syrup. And bacon. It's a good feeling.

How does this compare with last year's batch? Well, I don't have a side by side, just my notes. It is still a surprisingly sippable high proof devil of a whiskey. I think it falls just a tad short in the finish, but that is just being picky. It is an excellent drink, and I think if you are a fan of GTS you will not be disappointed in this new batch.

Thanks for the review. I have not opened a bottle of the '13 yet, but will with the holiday celebrations coming up. I am looking forward to it.