Average score from 4 reviews and 13 ratings 89 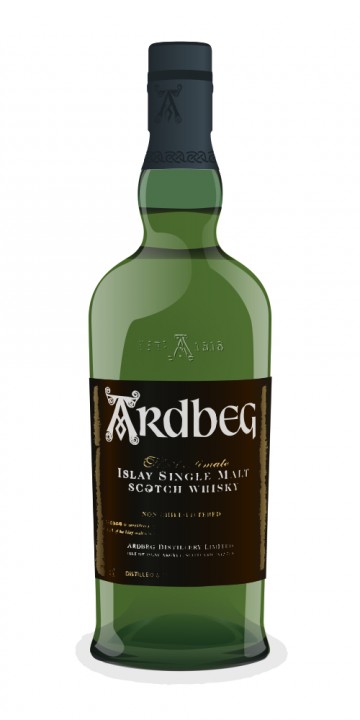 When it comes to Ardbeg I expect a strong and robust offering. However when it came to tasting the much famed Ardbeg 17, the experience was, well, not exactly matching my expectations.

Nose: Delicate is not a word I have used to describe Ardbegs in the past but this is exactly the first thing that comes to your mind when your nose is greeted with all the fruity notes. I'd say a bit of tangerines, apricots and lime. The longer you left the more it seemed like dehydrated fruit pieces of pineapple. Now there are traces of the peat in there but they are all hidden well below the top notes.. and one had to really dig them out. There's also some eucalyptus oil that you can find. Did get some damp mud notes in there as well.

Palate: The first sip has an usually sweet start that quickly disappears and gets replaced with a lot of sooty notes. The sweet is more on the sugar syrupy side. You do find some mild peppery spiciness initially which does get a lot more pronounced by the second sip. For me the palate was this expression's weakest part with not much to offer.

Finish: This one has a fairly nice finish with liquorice, pepper, some mild fruit notes and finally a lot of spearmint. By the time you have the second sip the spearmint flavors tend to linger much long giving it a nice ending.

All in all this is one Ardbeg that you're bound to have the house divided on in terms of their opinions. You'd either really like it for its uniqueness or you won't due to your liking for a certain delivery that you've come to expect from this distillery.

These are detailed and honest tasting notes, @TrailingTheMalt, and I enjoyed reading them. In my experience it is usually the palate where things can go wrong, and hardly ever the nose. I have never had the opportunity to taste the 17yo but now have a much better idea of what we are talking about.

Thank you @pierre_w .. what you say about the palate is true.. and in this case tht was exactly what was a bit of a let down .. but having said that.. I'd still say if you do get a chance do taste this one.. two reasons as per me.. one its from an era from which there won't be too much whisky available to savor in the near future and secondly even though its a variation from the usual Ardbeg.. one might just end up liking it too.. :)

They say love is illogical and fascination need not have a reason. I say they. I actually mean me. Early on in my journey as a malt nerd I decided that I would devote my irrational emotions to a little known distillery by the name of Ardbeg.

It started with the 10. Then the Uigi. The Corry was followed by the Alligator and I began getting hooked. Desire trumped logic and I flippantly decided that I would make it my life's mission to acquire as many Ardbeg expressions as I humanly (read financially) could.

And, thus, for no reason other than personal satisfaction began my journey towards financial ruin. Of them all there was one which got my attention above all the rest. It was the 17 year old. I don't know why. I proffer no explanation other than there was something mysteriously beautiful about it.

Given that it was getting increasingly rare on the ground I had a hard time finding one at a good price but somehow managed. Not wanting to crack my full 70cl open for a few nips I managed to procure a couple of minis for a tasting.

And so after lusting behind this malt for over four years I finally sat down and fulfilled my silly little love dream.

Nose: Very mild peat. When I say mild I mean it's really mild. Delicate soot. Tangerines. Cured meats. Sweet fish oil (if there is such a thing). Apricots. Dehydrated berries. Pineapple. Iodine and eucalyptus. It gets sweeter over time with a cherry cola quality. It is quite possibly one of the mildest Ardbegs on the nose ever. After a while you could be forgiven for thinking it might actually be a Speysider. There's none of the real Ardbeg aromas. It's not bad but it seems like everything is bit subdued.

Palate: Mild. Cardboard. Sweet lemon. Fruits with a wisp of smoke. Very faint peppers. Touch of mint. The palate is once again on the softer side. Everything is held back a touch.

Finish: Disappears at first but then comes back well. Oily with hints of oak and fruit spearmint.

Jim Murray had a hand in crafting this expression and it was the first one to emerge from the distillery when it re-opened under Glenmorangie's leadership. I think the intention was to re-introduce the distillery to a much much wider audience with flavors deemed palatable to the novice drinker.

I wish I had drunk this many years ago when it first came out. I would have liked it much better then. Today, while I still think this is a fine dram, I missed the robustness of the Ardbeg flavors that I am so used to.

But love is blind and I am happy that I was able to cross this one off the top of my list.

and only 40%. Very insightful review. Great to hear your feedback on this rare bird.

If there is one single malt that Jim Murray had a hand in creating it was the Ardbeg 17 year old. He claims it almost every time you care to listen. In 2004 I stopped in a small liquor store in Green Hills near Nashville. They had four bottles of 50mL minitures of Ardbeg 17yo . . . and I bought them all. I have tasted them over the years. This was my third mini bottle, and on this night I tasted against the Airigh Nam Beist and the 1977 Ardbeg. Here are my thoughts on the 17yo.

Nose: Nice, clean ripe fruits linger behind a very delicate bed of peat. It is very sharp and alcoholic attack for only 43%. More of a lingering fire with only bits of peat and smoke. The fruits certainly remind me of Glenmorangie with all the citrus orange and lemon. There are hints of apple and pear also, but then comes the white pepper. There is certainly a hint of both the Speysiders (Glen-something) and the highlanders (Glenmorangie, Oban). This is certainly an “all-things-for-all-people-type-of-malt.” Really, it is the lightest nose of the night. And I am saddened for all the great casks (peated and unpeated) that were used to make this . . . at a mere 43%. It works, but it could have been so much better . . . Water only adds to the “all-things” ambiguity. Now there are only hints of hints of hints . . . I can see Jim Murray’s values in this whisky.

Taste: Very interesting dry and only semi-sweet arrival of peat, seaweed, and oak. There is a slight soapiness if you concentrate too hard. Still, there is tons of sharp citrus attacking the tongue. With water you get a bit of that old 70’s Ardbeg diesel oil and the citrus takes a bit of a back seat. Strangely, I like this better with water.

Finish: Very salty and typical Ardbeg, but with only a whisper of peat and smoke. It is like the shadow of a typical Ardbeg 10yo finish. No wave of peat; just the salty remnants of where the ocean once was. The wave aside, it is still a medium to medium short finish - and boy does it stay with you . . . all warming like with the salt attacking your mouth. With water more of that pine note I am picking up on in the other two Ardbegs tonight – and it is more warming.

Complexity, Balance: I will say that the nose is well balanced to the extreme. It is like they vatted Ardbeg with about 5 other single malts in a very perfect way. You get the apple from Glenfiddich, the grass and lemon from Glenlivet, the orange zest from Glenmorangie, and the spice and wood from Oban along with the peat from Ardbeg. So balance is off the chart. Complexity . . . it is up there. Not as complex as the other Ardbegs tonight, but certainly up there in the single malt category.

Aesthetic experience: I don’t love the 43%, but I do like the bottle, label, color (lightest of the night), and age. My thought is that Ardbeg should do a 10yo, 16yo, and 21yo in the coming years . . . but I doubt they will. Seventeen just seems on the verge . . . at sixteen you are in Lagavulin land. At eighteen you are up with almost every other distillery. 17yo . . . it just seems off on its own planet . . . much like this dram.

Conclusion: A few months later after I picked up these miniatures (and tired one) I saw a shelf of Ardbeg 17yo (keep in mind this is 2004). I knew that Ardbeg 17yo was on the outs and that Uigeadail was the new thing. I remember thinking, “I should buy a case of these and leave them in my parents basement.” And hindsight has proved my point. A bottle of this sells for 4x’s what I would have paid that day. BUT . . . I would only have bought it for the resale – which I don’t believe in. This was fun to taste, but I don’t love it. I hear this has some unpeated Ardbeg in it. I hope that if Ardbeg every offers a 17 year old again that it will be fully peated Ardbeg at 46% (or more). This style is just too “Jim Murray-ish-balanced” for me. If you like that style you will love it!

@Nock, it is so true that when you get to know a reviewer's taste and style quite well, e.g. Jim Murray's taste and style, that you can get a fairly good idea of which of his likes and dislikes you yourself will like.

While I rarely, but not never, think in terms of resale values when buying bottles of whisky, myself, I would say that you also had the opportunity to warehouse the Ardbeg 17 yo in 2004 and then later swap it for other whisky for value added. Having high quality bottles for trade is always a good idea. (Anybody out there have a bottle of Octomore Orpheus 2.2 to trade to me now?)

@Victory, the swapping idea is always nice. However, other than yourself, I really don't have any other swapping buddy opportunities.

I do kick myself for not trusting my instinct to buy up several bottles of the 17yo. I also kick myself for not buying the $499 bottle of Ardbeg Provenance that was sitting next to it in a glass case. That one has gone stratospheric in price. And then there are all the Antique Collections, the Broras, the Port Ellens I passed on . . .

I try to stay content with the decisions I have made (hard to do). And I hope to make better decisions in the future.