Average score from 2 reviews and 3 ratings 90 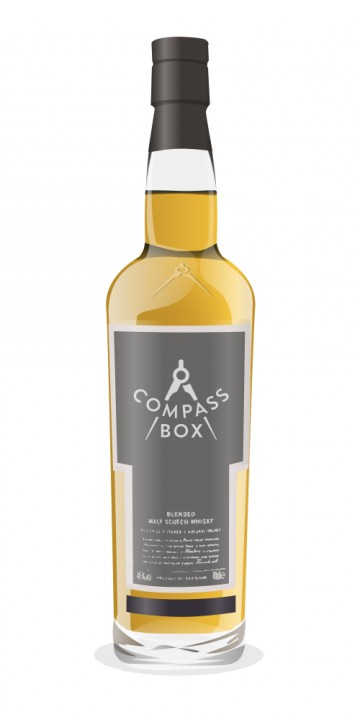 Finish: short-medium and a mix of the citrus, grass, and cream. Slight grain bitterness on the finish, but well balanced all the same.

I really loved this. I took a whiff of it and it was unlike any other whisky that I've had. The quality is very good, and the nose is intoxicatingly seductive; it keeps drawing you in. This could be a dessert in its own right.

So, Compass Box, one of the better independent bottlers, and whisky innovator, led by J.Glaser has turned 10. How time flies! It’s no secret that i am quite the admirer of Glaser’s work. I’ve previously reviewed their core range, and when I've heard they just released two expressions to mark their 10th, I knew i wanted to review those ASAP.

Double Single is actually a re-do of a blend released by CB in 2003, and never released after that. Essentially it’s a marriage of two whiskies - One is a single malt, and one is a single grain. The idea is to show the benefits of blending, and what great outcome can be achieved when marring and blending grain and malt of extraordinary quality. I know, most of us whisky geeks / snobs usually pass on blended whisky because of the ‘evil’ grain, but as CB have shown before with the Hedonism, Grain whisky can be fabulous.

Bottled at 53.3 % ABV, and Non Chill filtered, and natural colour (like we like !), it is indeed a very interesting whisky to sample. Only 876 bottles were ever made of this one. let’s see what magic John Glaser is up to this time :

very complex, interesting, and one of the best I've had from Compass Box. What a way to celebrate their 10th - With style. Again, J.Glaser delivers. Pity only a few bottles were ever made. My advice for you - Get one while you can. It’s not cheap, but very interesting.