Average score from 3 reviews and 3 ratings 93 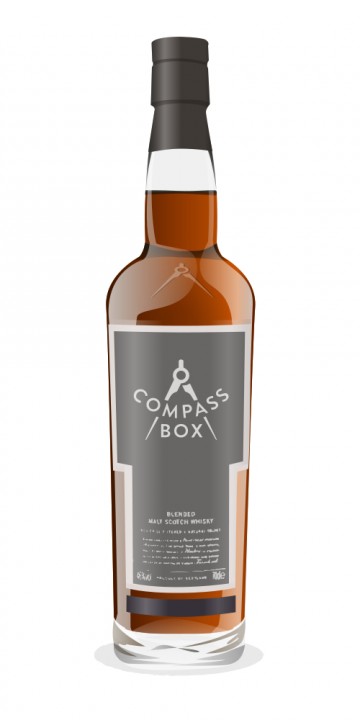 Everyone loves a good story. None more so than me when it comes to whisky. And Compass Box seem to have a ton in store. Given the lopsided state of the whisky industry where stories (read marketing gimmicks) trump whisky quality it is natural to be a bit weary of enticing tales.

But when the spirit inside the bottle just happens to be a cut above so many of the others then a good story makes it that much more special.

Which is precisely the case with this gorgeous and extremely unique blend.

Compass Box, in my opinion, are possibly the finest independent bottlers of blended whisky today. From the Spice Tree to The Flaming Heart and now to this beautifully crafted gem there is seldom an instance when they are sub-par at their craft.

One day a strange thing happened at the Compass Box offices. A cask turned up claiming to be around 33 years of age which included spirit that had already been blended and left to mature. Now this is a strange thing to have in ones' possession.

However, what is stranger still is that another cask was brought into their possession which also happened to have blended spirit in it and this one had been maturing for over 40 years.

The delightful mystery is that no one really knows what kind of whiskies were in both casks or even what sort of casks they were. So Compass Box did what they do best. They experimented.

They felt the only way this could work was if both the spirits were blended to make one whisky. And so after many tries at the correct ratios they finally arrived at The General which is named after the 1926 Buster Keaton movie where he takes an old steam locomotive (The General) on a wild ride to find the love of his life.

Finish: Long. Oloroso sherry. Cinnamon. And the mature oak is back.

This is a lovely whisky which seems to have worked as a result of creative blending. And every time I try a different Compass Box release I fall in love with their style a little more.

Until last week, I hadn’t tasted whisky in nearly three months, owing to the regimen of meds I was on following knee surgery. The greatest woman in the world (whom I happened to marry) decided to go overboard with this little gift to celebrate my return to active whisky duty. “Are you #@%&*?! kidding me?” was my response when she gave me this last weekend.

The missus and I are classic-movie buffs, and we watched Buster Keaton’s THE GENERAL (for which this whisky was named) the night before my surgery. Hence, her motivation for this gift, even if it was “about $250 more than I planned on spending,” she said. “So we’ll hitch rides to work and eat peanut-butter sandwiches for the next three months,” I replied.

This is far and away the most expensive whisky in my cabinet. Sheesh, I’ve seen Broras sell for less. I don’t know which was more overwhelming: the gift itself, or the first taste I had of it. This is seriously delicious stuff, rivaling Black Bull 30 yo for the best whisky I’ve ever tasted. (And they’re both blends. Go figure.)

The story behind this whisky is shrouded in mystery. According to the Whisky Israel website, “Two different companies approached Compass box with similar stories: they each had several casks of blended Scotch that had been blended at quite young ages, then not required and put back into cask and left to age. One parcel was 33 years-old and the other was also quite old, but CB won’t reveal the information because they fear they might violate one of the UK’s Scotch Whisky Regulations.” Seems like that rascal Mr. Glaser did what he could to slip under the radar for this limited (1678 bottles) release.

Review based on my third dram from a bottle opened three days ago. This is a bottle I want to last for some time, but it’s going to take some serious willpower to do so. It’s strong stuff that benefits with a splash of water, but don’t drown it.

Nose: Olfactory memories of my grandparent’s house. Sweet, musty, antique wood combined with the aroma of Grandma’s from-scratch cherry pie baking in the oven. I think Grandma let the pie burn slightly, and that’s meant as a compliment. It tempers the sweetness with a savory barbeque edge. A ten-minute rest opens up a sensory overload. Honey, maple syrup, spicy potpourri, mint, bananas, mixed nuts, cinnamon, and well-slept pillows. Some sherry casks entered into the mix somewhere along the line. It’s just…wow. I don’t have the superlatives to do justice to this nose.

Palate: Woody, fruity, buttery, and spicy. Slaps your tongue with a cinnamon-ginger sting at first before it settles down into something warm and richly sweet. There’s also a strong presence of what I can only describe as a savory, salty Thanksgiving dinner (turkey, stuffing, potatoes and gravy, cranberries—they’re all here) in delicately perfect balance with acidic Italian dressing. The layers of flavor just keep coming in waves. I could let this sit on my tongue longer than a Depression-era flagpole sitter.

Finish: I’d give this whisky another point or two if the finish were a bit longer, although it’s long enough to satisfy. I’m not really complaining—I don’t know if I could handle another 20 seconds of such nirvana anyway. Loads of oak, sherry, and mint. Ends with some smooth vanilla before a cinnamon kick leaves you longing for an encore. (Just take another sip. That’ll do the trick.)

My wife purchased this bottle from a newly opened Binny’s outlet. It was the only one they had in their glass case, and it appears they have only two bottles left among their 30 stores. I’d love to send samples of this to all Connosr members, but…sorry, I won’t be doing that. This one’s mine, mine, all mine I tell you!

But if you’re ever in the Chicago area, I’d be more than happy to let you have a few whiffs from my Glencairn.

I just snagged a 33 year old Duncan & Taylor Glendronach Three Generations for $150. A good buy. As for The General, it's quite a mystery aside from the age, which is probably the youngest age in the bottle. It's likely there are older casks in there as well. I would say that bottles with mystery contents are really dependent upon the reputation of the bottler, which in the case of The General is sound. If we don't know which distilleries have contributed to a bottling then it's worth wondering how old it really is. I trust Glaser's reputation. I also have a bottle of 24 year old Burnside that is allegedly 24 year old Balvenie with one percent Glenlivet (?). I have yet to taste that bad boy. I plan on opening the bottle on my birthday.

@rigmorole: Good question for which there seems to be no answer. I visited dozens of websites when doing research for this review, and I didn't find anyone who even speculated as to its contents. When you're dealing with whisky that was blended and barreled for at least 33 years (with the other parcel being even older, apparently), I don't know if it's possible to detect any "distillery profile" in the end result. I'd say there's some Speysiders in here. How's that for bold speculation? ;)

The newest star at the Compass Box firmament is this blend The General, offered in a nice perspex box. Very retro. This piece of art is composed of two old blends, which each were created decades ago themselves. The part on ex-sherry casks is 33 years old, the part on ex-bourbon casks no less than 40 years.

Wonderful attack that does not burn, despite the high ABV. It is syrupy on the palate and very spicy (thanks to said ABV). The fruit shines first, but a mild sour touch budges in. Velvety soft. Touch of woodsmoke. Twig of mint? No, it is mentholated, more like; Midpalate a nice dose of oak appears. Good balance. Exceptional.

This is the first review I've read of Compass Box's The General. Thanks. Great review by the way.