Average score from 5 reviews and 21 ratings 78 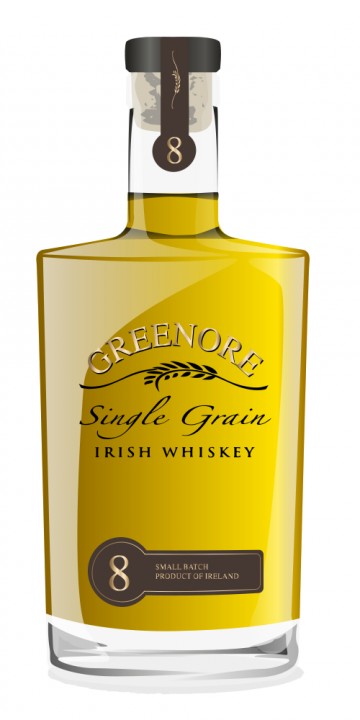 I am very fond of this Greenore. I always have a bottle in my cabinet (apart from the closed bottles - I have the whole range - which I collect). It is the only Irish single grain on the market, if I'm not mistaken. And a very good one. The brand was recently sold to Jim Beam Inc, but the people at Cooley have promised they will keep producing this wonderful spirit.

Cooley Distilleries in the Republic of Ireland makes 8, 15 and 18 yr old Greenore Maize Single Grain Whiskeys. Currently no other 'Single Grain' products are produced by Cooley other than the maize version. Cooley posts a few highly questionable comments about the nature and uses of 'Grain Whiskeys' on its site while describing the Greenore Whiskeys. This language will have to be rethought if they ever want "Single Grain" to mean something other than Maize, and to put out either a wheat or a rye 'single grain' whiskey-- since wheat and rye are both much more flavourful than barley-malt

Nose: a very nice bouquet of mostly wood flavours, featuring caramel, vanilla, honey, a touch of rosewater, and a trace of grain

Taste: there is definitely a nice subtle underlying maize flavour here, but as with younger aged corn whiskeys, like Mellow Corn, the wood flavours are much more powerful than tasting the grain. There is a lot of vanilla, caramel, and toffee. There is a touch of oatmeal flavour in the profile as well

Finish: rather long, with sweet caramel the dominant flavour. The finish is not as enjoyable as the delivery

Balance: This is a pleasant whiskey, but like younger aged Corn whiskeys, it is an adventure in wood, not an adventure in grain. I am now convinced that either a very well made unaged corn whiskey or one that is aged no more than maybe one year, would be the best way to taste the grain known as maize=corn. I expect that in the near future some artisan distilleries, probably in the US, will give me the really clear taste of corn for which I have been looking

@Victor, for completeness' sake, allow me to say that they also have a 6 Year Old (albeit only for the Swedish market) and a 19 Year Old Single Cask exclusively sold in Dublin Airport's duty free shop 'The Loop'. I already have the 6 Year Old and if all goes well, should have the 19 single cask by the end of the month. Tasting notes will follow :) Having said that: nice review!

Thank you, @markjedi1, both for the additional Greenore information and for enjoying the review. As a fellow grain flavour lover, I'll bet that you are ready to try that Quinoa whisky! (yes, that one will be awhile from now, I think) But, if you get the chance, do try that High West Silver Whiskey Western Oat-- oatmeal in a glass!

This is in our new grains tasting. Greenore is a small town in Ireland, and the Greenore range of Irish whiskies is made in the nearby Cooley distillery. It is an Irish single grain, and Greenore is made of 100% corn (with a small amount of malted barley to aid fermentation). It is aged in first fill ex-bourbon casks at the 200-year-old warehouses at the Locke's distillery at Kilbeggan in County Westmeath. Greenore was first released in 2005 and there are now also 15 and 18 year old expressions. The Greenore 8 retails for around £32.

Dominic says "Sits comfortably alongside Mellow Corn but this is an altogether more disciplined and accomplished whiskey, but still surprisingly fresh and vibrant after eight years in the cask. The clean grain is accompanied by green fruits, and rich mouth-coating oils, and there's an astringent and abrasive aspect to the whiskey too. Intriguing and enjoyable."

@WTC and @dbk, Gentlemen because of stimulus from the discussion of the two of you I have just gone out and bought myself a bottle of Greenore 8. I avoided it for a long time because in this locale I can for the same money get a bottle of Handy Rye, Stagg Bourbon, or Ardbeg Uigeadail. It was clear, though, that I needed the point of comparison and reference for aged corn whiskey-- and I don't think anyone here sells Cooley's Greenore by the drink. Reviews by me of Mellow Corn, Greenore 8, and High West Silver Whiskey Western Oat will follow, maybe today. When I do my standard 3 hour, 25 whiskey tastings every month or two I always organize it around the grain flavours. I begin with "This is what Barley tastes like...this is what Corn tastes like...this is what Wheat tastes like...this is what Rye tastes like." (I may add Oat in the future) Then we sample 20+ variations on taste themes around those 4 grains. My goal is to give an experiential overview and frame of reference for all of the major types of flavours available. For the first four grain archetypal whiskies I use Old Pulteney 12, Georgia Moon, Bernheim Original Wheat, and now Wry Moon (if I have it) or Rittenhouse BIB. Throughout the presentation I ask my guests, "Can you taste the wheat in this bourbon?" or "Can you taste the barley-malt in the Glenmorangie?" I expect that we will see more exotic grains make an entrance in the next 20 years. Quinoa whisky, anyone? I am very much hoping that someone discovers another strong-flavoured grain that the distillers can work with. In the meantime I consider it a USA national scandal that here in the land of mega-corn no US distillers make a corn whiskey more than 4 years old. I think that it is because almost no one here really likes the taste of corn. Most bourbon is in my opinion just blended rye whiskey or (5% of the time) blended wheat whiskey. Even the very high corn mashbill bourbons, like Blanton's, in my opinion, get their flavours almost exclusively from the wood. It IS good to taste the corn, and I am glad that Cooley has given us the opportunity to try a version which is aged a significant length in the wood.

@WTC, I would definitely imagine (since I haven't yet sampled the Greenore) that 8 years of wood aging would give a lot more mellowing and rounding than would 4 years for Mellow Corn. Curious palate: where would 'smoky' come from? I am for the first time sampling Mellow Corn as I write this, and it, too, is slightly smoky. Is this in the corn? Maybe so--there is certainly no peat in either of these. Barley has very mild flavours, and corn, if anything, even more so. It is nice to explore the nuances of these rather delicately flavoured grains, though. I think that it is a necessary choice for Cooley to use used barrels for the aging, since new wood flavours would overwhelm the delicate flavours of the corn, and all we would be getting after 8 years, much less 15+ years, would be strong wood flavour like the woodiest bourbons.

Nose: This is a single grain whiskey that walks and talks like a bourbon, with the corn doing a huge amount of work on the nose. Vanilla and fresh rubber mix beautifully with the sweetcorn. There is even the distinct aroma of a freshly sharpened pencil, dipped in caramel. That may not sound all that appetising as a concept, however believe me in this glass it smells like nectar. 2.0

Taste: The pencil, caramel, and vanilla have all been whipped up into a thick smoothie. Full bodied, with the lead, rubber, wood shavings and caramel all balancing out beautifully to create a sumptuously sweet mouthful. 2.0

Finish: The corn-oil comes rushing back to prominence, before making way for the vanilla to return. The wooden spice gives a nice balance to final caramel overtures. 2.0

Balance: This is really wonderful stuff. In a blind tasting you would be hard pushed not to have this down as a bourbon, however it does seem to have a more restrained palate than its american cousins. This Irish single-grainer has a more humble, yet no less mouth-watering approach than a typical bourbon, however this is also no doubt due to the lower alcohol content (40%) than most of Kentucky's offerings. It does nonetheless make this whiskey highly approachable and effortlessly drinkable. 2.0

@OJK well maybe there is a reason they dont marketing the 6yo in the UK ;-) I must say im not fully satisfied with the 6yo, i did get the most notes that you have in the 8yo and the taste is rather smooth and pleasent (on the palate enyway), like a more modest bourbon. But in the 6yo i felt a to intense taste of pure spirits, like the 6 years really isnt really enough to mature this dram. The taste of spirits, or (bad)vodka was most intense on the finnish and kind of destryoed the smooth taste i had on the palate. I like white spirits to, especially a good vodka, but not in my whisky. However im still curious of the 8yo and must taste it, because is the vodka taste gone, it would be great!

Is the grain used posted on the bottle or merely assumed to be corn here? I cannot tell from the photos and do not have a bottle ready to hand. Single grain, I assume, means corn here. Does 'single grain' always mean corn in Ireland and the U.K.? From the US this seems bizarre nomenclature to me not to name the grain used on the bottle. BIG differences there are among the tastes of malted barley, barley, wheat, malted rye, rye, and corn. In Scotland (and Ireland) there seems to be (generally) malted barley and generic "grain". There are whole universes of whisky to be developed within the realms of rye, wheat, corn, and who knows what other grains! Why not inform the buyer what(s)he is buying? Tradition is no good reason to keep unclear nomenclature.

Greenore is matured in single use bourbon casks, giving it the suble vanilla tones and honeyed sweetness that is so characteristic for Greenore. It has a truly distinctive taste (as does the 15 yrs).

The nose is soft, mostly sweet corn and delicious hints of bourbon and lemon.

The taste is a rich, melt-in-your mouth grain with a hint of barley.

A wonderful journey for your taste buds and quite different from most other whiskies I've come accross (admittedly not that many so far).

This - along with the 15yrs variety - are my personal favorites.

I discovered Greenore 8 year-old last night at the local whiskey joint and was very pleased with it. Like markjedi1, I found it had a lovely vanilla sweetness, though admittedly I did find it a little too saccharine by the end of the dram. I also tasted a hint of menthol, like Green Spot (but pressed further into the background), that made for a nice contrast to the vanilla. I will have to try it again...

Watched the video review. Very informative. I'm very interested in trying this whiskey! I'm curious, where is your accent from?

Also, you seem to be a big fan of this whisky. I'm surprised it only got a score of 72.