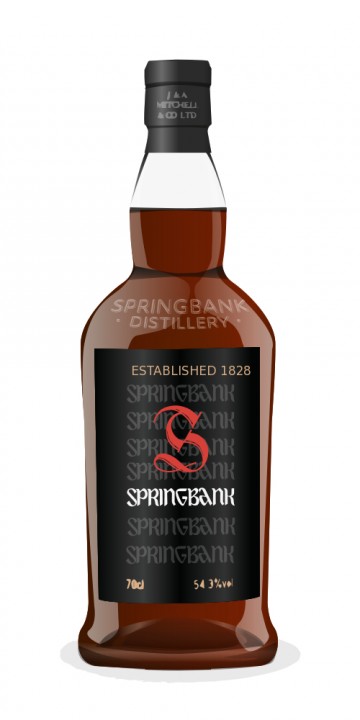 This review is from a bottle that is approximately half full and has been opened for about a year and a half. Based off of prior experience with Springbank whiskies, I have noticed that they get better and better with time in the bottle. Related to that, I find it best to be patient with each dram as well because they have a tendency to bloom and get a lot more interesting as I struggle to resist it's beckoning call. Thankfullly, the nose on each of their offerings are always delightfully multifaceted enough to keep me at bay.

Finish: LONG, salty, and dry...milk chocolate, freshly cracked black pepper, yeast, musty wet hay, tobacco, a certain je ne sais quoi right in the middle of the finish that completely enthralls me, and a very subtle smoke that is noticeable after everything else eventually fades away.

This is one of my, if not the, favorite single malt I have ever tasted. It is extremely unique while still retaining that Springbank signature that I have come to adore over the years. I regret not purchasing a second bottle when I had the chance. I mourn the day that I pour the final dram from this bottle.

Edit: I forgot to mention that I didn't add water due to previous experimentation leading me to the conclusion that I prefer it without. YMMV

@KRB80, thanks for the advice, but my bottle was finished off the other night when I brought the last inch or so to my club night. A couple guys there was pretty gaga over it, so I was glad I shared.

Here is my recent video review:

I reviewed this bottle about three months ago and it has improved dramatically in the past month since I took it to a party and it got down to about two-thirds empty.

If I had known how better it would get, I would have poured half into an empty bottle and let both oxygenate for a while and then poured it back into the Springbank bottle again.

Adding water is ill-advised in the case of this fino. It can bring out a slight sulfuric tinge and the whisky waters down terribly fast for some reason, given its relatively admirable ABV. A vibrant, many-faceted creature. Mercurial and dynamic. It really changes depending upon what you have already eaten in the past thirty minutes, as well as how long it's been in the glass.

I wish more producers would mention more often in what kind of Sherry or Port cask it was matured or finished. They all taste sooo different, fe: Oloroso being bone dry with walnuts, Manzanilla a little salty and ruby Port as sweet as red fruit candy. Sadly my guess is that this wont be a trend considering the World War of casks.

Shout out to UAE. Great reviews on your site, Activist!

Okay, so I have a wee sample of the Claret left. This will allow me to compare it with the bottle of Fino I just cracked open for the first time.

First, I shall review the Fino.

Adding water is ill-advised in the case of the fino. It can bring out a slight sulfuric tinge and the whisky waters down terribly fast for some reason, given its relatively admirable ABV. A fragile creature, indeed.

The shift from brininess to sweet on the finish is very sudden, like a roller coaster ride.

I've already done tasting notes on the Claret, so I will just say that it is more dignified than the upstart Fino, which is suprising since the Fino is two years its senior.

The Fino actually tastes younger. However, the sudden shifts and changes in the mouth rarely happen with whiskies younger than 14 years, so that aspect of it is a bit less of a shocker, although I must say that whiskies like this are not all that common. The claret wins, but the fino is a wild fun ride. Which do I like more? The fino, but just barely. The claret is more "steady on" then the fino. It has its sea legs about it.

Of course, sometimes "unexpected" is just what the doctor ordered. Charles Darwin be damned. He was a hopeless racist and a eugenicist anyhow. And if you doubt me, read "The Descent of Man."

Evolution happens in fits and starts, and not always through "mutations." When it comes to Springbankery of the Finoesque variety, the evolution might just propel your appreciation of whisky into a new category of strange, like some sort of furtive cryptid peeping through your window on a stormy window at night . . . then again, it is very blustery outside tonight where I live. Oh no, I'm scaring myself. Time for another dram of Fino to settle my only slightly ruffled nerves. . . there, that's better. Now what was I saying?

I should say the fino has been open since late last week. It has changed a bit with the air. Strangely, it was better upon first opening it late last week. Or perhaps it's must my palette, what I just ate recently, etc. I drank an unsweetened lemonade about an hour ago. Bad idea, perhaps.

Sorry, typo: I meant to say that I like the CLARET BETTER THAN THE FINO. This review is riddled with typos, I see. Wish I could edit this post. Drat!

A delightful dram. I have a recent bottle of Claret on the brain, and this eases me pain at the loss. Yes, I do like this Springbanker.

Eye: Rich grand sight that really catches the light. One of the best natural colors I've been in some time. A deep chestnut.

Nose: Typical Sprinbank must without water. With water, the sweet scents come out. A delightfully curdled hint might be a flaw to some but I revel in this trademark Springbank characteristic that is present in spades here, clover, nutmeg, maple, caramel, faint fino, very rich malt overtones, alcohol heat to some degree without water.

Yes, I can smell high alcohol content. In this case it's right welcome up the ole nostrils. And why not? I like to maintain that it is not only possible but in rare cases recommended to attempt a wee buzz by huffing whisky fumes and I've been known to do it (tactfully) in movie theaters, much to the horror of people sitting near! Ha! Too bad for them!

I wonder if this whisky had a limited run? I can't imagine why else not more has been said of it. A charming bottle. In many ways, more interesting than the fino but the fino is more sophisticated and elegant despite it's two years the junior. The roof of the moutn is last to release this intoxicatingly beguiling ichor.

Hey Rigmorole. Is this review of the Fino? The title says so but the comments in your last paragraph suggest otherwise.

And about that booze huffin': Do you think it's just easier to get away with huffin' than straight-up drinking in a theater? Or else, why huff there? I would have thought it was obviously because of being sneakier, but then you say folks around you still notice. Hmmm....